A new Los Angeles Rams bobblehead to commemorate Matthew Stafford’s game-winning touchdown pass to Cooper Kupp in Super Bowl LVI was released by FOCO. The limited-edition bobblehead is numbered out of 322 and won’t be available once quantities sell out.

FOCO recently launched separate bobbleheads for Kupp and Stafford, with each player set to a ‘Rams House’ theme. The leading merchandiser also made a mini bobbleheads set available for purchase, along with other Rams Super Bowl memorabilia.

The Super Bowl bobblehead has Stafford and Kupp sharing one base, with the quarterback in a celebratory pose and wide receiver holding a football. 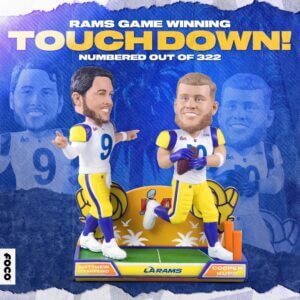 Kupp’s performance earned him Super Bowl LVI MVP honors and capped off what was a remarkable season. He led the NFL in receptions (145), yards (1,947) and touchdowns (16), and was named the Offensive Player of the Year.

Kupp now is in position to sign a lucrative contract extension, though he isn’t focused on becoming the highest-paid wide receiver in the NFL. Kupp recently explained he merely is looking for a deal that would fairly compensate him.

After reportedly playing through rib and back injuries, Stafford revealed he underwent a procedure that should have him in stronger position moving forward. Stafford did not provide any details.