The designs have both players standing on a base that includes their name, team logo, Super Bowl flag, jersey number and ‘Rams House’ slogan written in the same font as the famed Hollywood sign.

Both bobbleheads are individually numbered out of 322 units and will not be restocked once quantities sell out. FOCO recently sold out of Rams Super Bowl bobbleheads for Kupp, Johnny Hekker, Andrew Whitworth and Jalen Ramsey.

A Stafford bobblehead to commemorate the Rams reaching the Super Bowl was previously released, along a version for Kupp that recognized being named the 2021 Offensive Player of the Year. 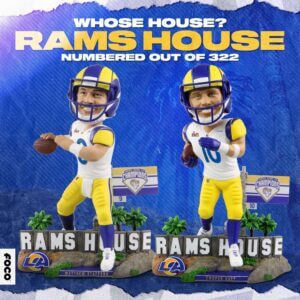 Stafford was 26-for-40 and threw for three touchdowns in the Rams’ win over the Cincinnati Bengals, while Kupp hauled in eight receptions for 92 yards and two touchdowns, including the go-ahead score in the final two minutes of the game.

The Rams became the second team in NFL history to ever win a Super Bowl at their home stadium, following in the footsteps of Tom Brady and the Tampa Bay Buccaneers, who accomplished the feat in 2021.

After reportedly playing through rib and back injuries, Stafford revealed he underwent a procedure that should have him in stronger position moving forward. Stafford did not provide any details.

Coming off a remarkable season in which he led the NFL in receptions (145), yards (1,947) and touchdowns (16), there’s been an expectation Kupp would sign a contract extension with the Rams.

An assumption is Kupp could easily become the highest-paid wide receiver in the league, but the 28-year-old recently said that is not a focus of his. Instead, he merely is looking for a ‘fair’ deal.

Even with some uncertainty regarding a potential contract extension, Kupp was with the Rams for the first day of voluntary workouts.