The Los Angeles Rams are nearing the end of a disappointing season that’s been marred by injuries, but FOCO is providing fans with a fun look back to Super Bowl LVI with their latest release of commemorative bobbleheads.

The collection features a special design for each NFC team that has won a Super Bowl in its franchise history. The Rams Super Bowl champions bobblehead is limited to 323 and will not be restocked once quantities sell out.

Along with recognizing the Rams’ Super Bowl win from 2022, the commemorative bobblehead features the logo of Super Bowl XXXIV, which the team won while they were still in St. Louis. The Rams franchise also has won two NFL championships (1945 and 1951) in addition to the Super Bowls.

The Rams bobblehead features a commemorative player in an action pose set atop a thematic base that includes a reference to the franchise’s two Super Bowl wins. 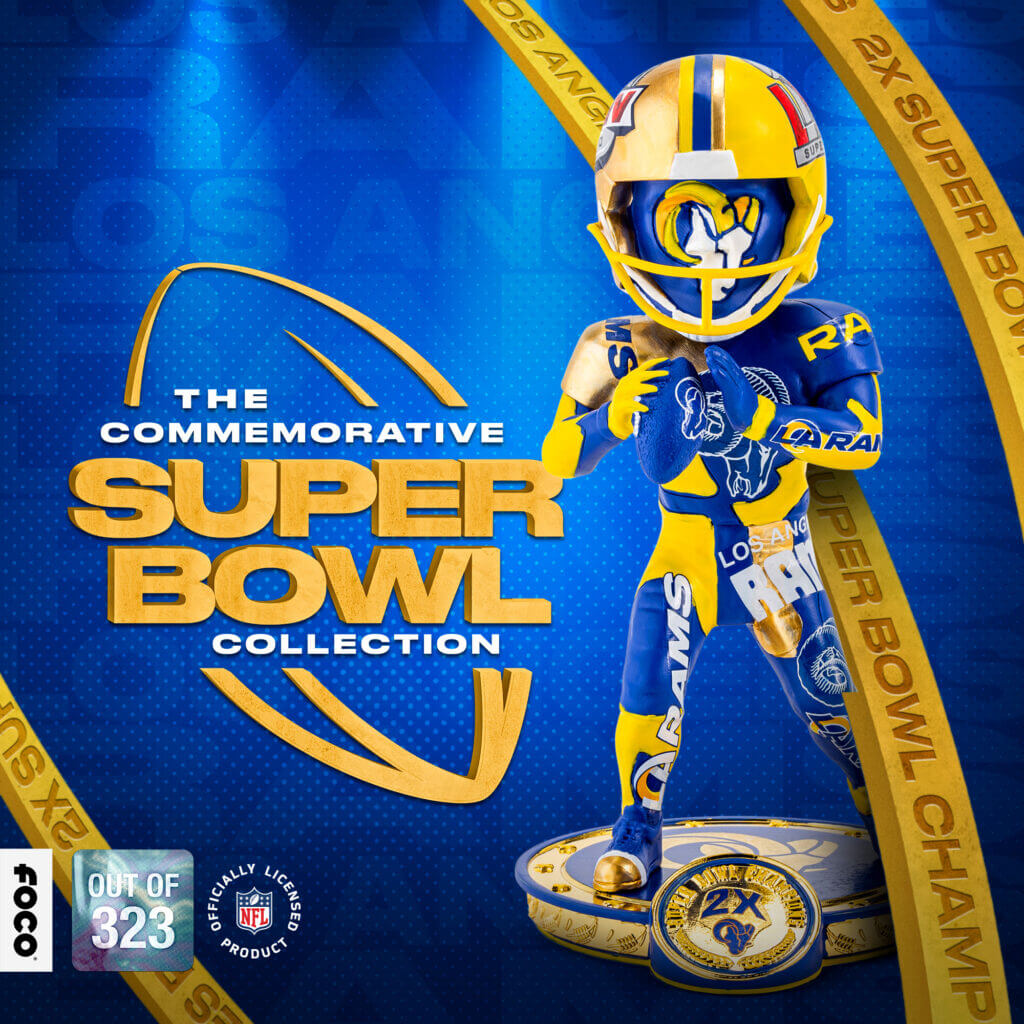 The Rams became only the second team in NFL history to win a Super Bowl in their home stadium. Coincidentally, both of those came in back-to-back years, as the Tampa Bay Buccaneers accomplished the feat in 2021.

FOCO previously celebrated the Rams’ title with the release of various memorabilia along with limited-edition Super Bowl bobbleheads.

One of the more popular designs was of Aaron Donald celebrating after getting the definitive defensive stop against Joe Burrow and the Cincinnati Bengals.

Donald had already been part of several Rams bobbleheads that were released by FOCO over the past few year. One of which paired him with Matthew Stafford and Super Bowl 56 MVP Cooper Kupp.

Donald had four tackles in the 23-20 win over the Bengals, which included a pair of sacks and two tackles for loss. Donald unveiled his famed ring celebration after the Rams defeated the San Francisco 49ers in the NFC Championship Game, and again after forcing Burrow into a final turnover in the Super Bowl.

Fans looking for more products beyond bobbleheads can look to FOCO for socks, Christmas decorations, clothing, signage and more.