The Los Angeles Rams roster that won Super Bowl LVI featured a bevy of stars, and many of whom are returning for this season. The group is led by Aaron Donald, Cooper Kupp and Matthew Stafford, who are featured on the latest Rams bobblehead set by FOCO.

The limited edition Rams House bobblehead scene was made available for preorder on Thursday morning and is individually numbered out of 322 units. The bobblehead set will no longer be available once it sells out.

FOCO still has individual bobbleheads of Stafford, Kupp and Odell Beckham Jr. available for pre-order. So too is a dual bobblehead that commemorates Stafford’s game-winning touchdown pass to Kupp in the Super Bowl at SoFi Stadium. 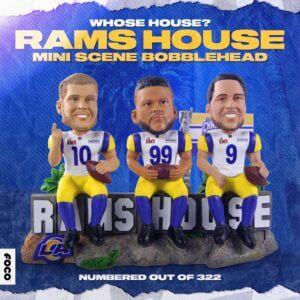 Kupp’s performance earned him Super Bowl LVI MVP honors and capped off a remarkable season. He led the NFL in receptions (145), yards (1,947) and touchdowns (16), and was named the Offensive Player of the Year.

Donald had a key stop on third down and got to Joe Burrow to force the Bengals into a turnover that sealed the Rams’ 23-20 victory.

There was some concern Donald would retire a champion, but he decided to continue with his career. The Rams are believed to be in the process of negotiating contract extensions with Donald and Kupp. Stafford signed a four-year extension in March.

Kupp has indicated his focus is on being fairly compensated rather than becoming the highest-paid wide receiver in the NFL.

Along with the bobbleheads, FOCO offers a wide collection of Rams Super Bowl merchandise. Products include swimwear, signs, banner, pins and more.